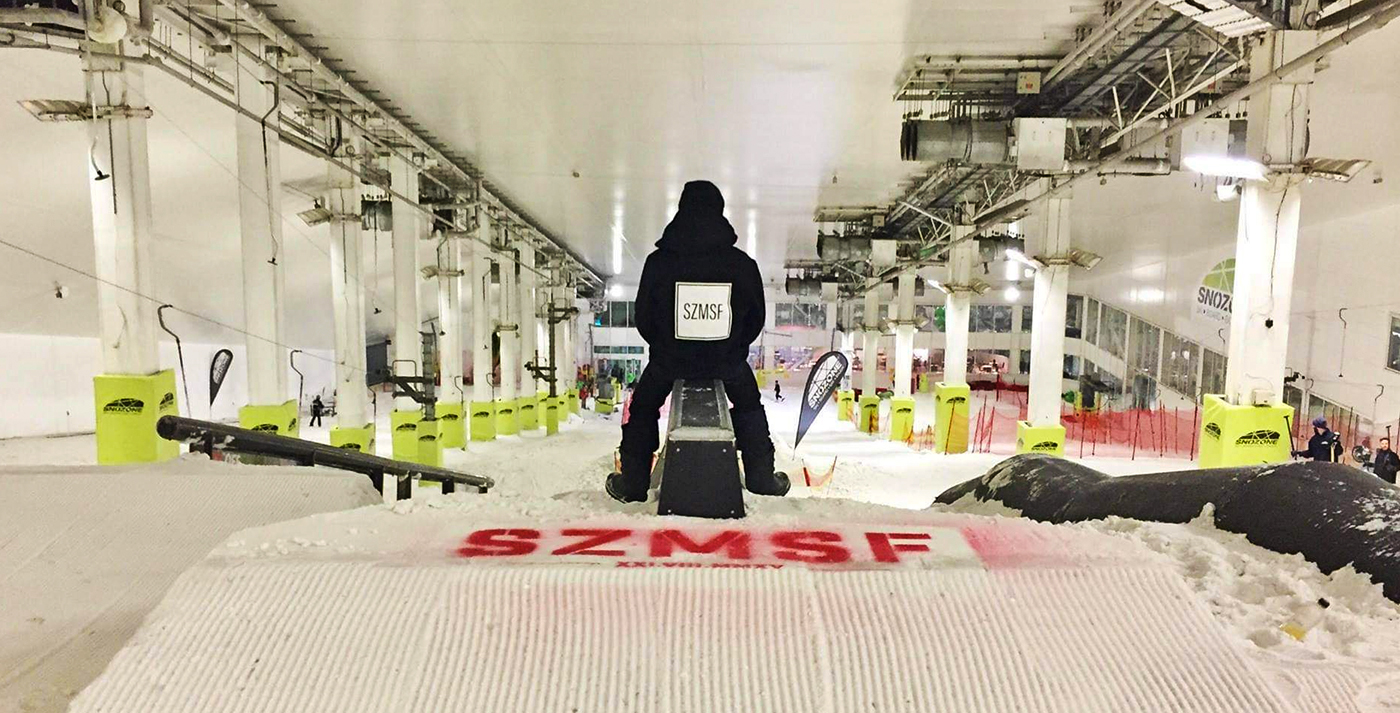 Giving a community an image

About
SZMSF stands for the Snozone Massif, an eclectic community of freestyle snowboarders who ride regularly at Snozone in Milton Keynes. They regularly filmed themselves but with no central organisation of the footage, they relied on individual WhatsApp conversations to send shots to each other.

SZMSF required a visual identity to represent their growing community. They also required a method in which to become more of a community, beyond just meeting at the local snow slope. A strategy that used a number of channels would help the community grow, especially one which allowed easy sharing of footage and somewhere to host completed videos. The challenge was in creating something that people would want to use, and in doing so, grow the community through exponential exposure.

The target users for this brand were primarily freestyle skiers and snowboarders from the local snow slope, they were of a diverse age range and had a preference for inclusivity, bold colours and modern typefaces.

This project started as an idea to represent the freestyle community at the local snow slope in Milton Keynes and grew into a local home grown brand. This was a charitable project and I acted as Creative Director along with five others who were community leaders. Being involved from its conception, I helped to strategise its image and message, as well as its scalability. This included responsibilities such as the brand and retail strategy and creating all marketing and digital assets surrounding the brand.

In creating a visual identity for the community, I worked with the five community leaders to create a set of logos. In understanding the preferences of the target users, I pulled together designs that represented an image of inclusivity and belonging to pull the community together. This included the use of a square and of a bold red colour that together created a very physical and familiar image. The square is a stable symbol and is a shape that most people trust, indicating honesty, security and conformity. The pantone of the red being at the lower end of the visible light spectrum and a grounding colour. The typography chosen was a modern thin typeface that contrasted well with the boldness of the red and the square.

In growing the community, I started by setting up a WhatsApp group channel and used the visual identity to give the members a means in which they could communicate in a forum outside of the snow dome. The next step was to grow members of the group, as snowboarders love stickers and representation, ordering a large amount of vinyl stickers, designed in line with the visual identity and distributing for free, helped to drive the brand presence. With a few well marketed snowboard events, the WhatsApp group membership grew exponentially. I have since created all the digital assets for their marketing, events and clothing.

The WhatsApp group became a focal point for members of the community to swap footage and park plans, but shoots would get lost in the thread of conversation. I therefore set up a public Dropbox folder for footage to be donated and created a regular snowboarding and skiing edit. I set up an Instagram page for individual shots and a YouTube channel for the edits.

To create familiarity with SZMSF’s visual identity, I created all the intros, outros and transitions for all videos.

SZMSF continues to grow as more people learn to ski and snowboard on freestyle nights. As the Snozone Park Team have become members of the group, the community gets early access to park plans and a line of communication straight to the Park Team to request additional park features and changes. The visual identity has been used in more than just stickers and they have had a number of clothing designs created so the members can continue grow and represent their community. They plan to put on more events and continue to grow their online presence.

Do you have an idea for a brand?